My last two weeks at Nature in Art have been relatively the same, I have been tasked with working on social media for the museum. For millennials this seems trivial, like an everyday pastime that isn’t given much thought, except what will get the most “likes.” However, in the museum world, especially a remote museum like Nature in Art, social media is a huge resource.
It helps get the word out, creating a larger, and more diverse clientele.

Different social media platforms will reach different types of people. For example, Facebook has a wider reach with different people, and also has pages you can use for your business. You can also use Facebook advertising, which offers targeted reach for customers, it allows you to narrow your
search until you’re focusing attention on only the clients most likely to be interested in your services. However, Facebook may not necessarily be the right platform for you, the fast-paced nature of Twitter, along with the fact that it appeals to world leaders, politicians, and journalists can make it ideal for organisations who want to stay ahead of the curve. Using both platforms is definitely a smart choice, especially for Nature in Art, which is trying to attract new visitors, as well as encouraging return visits.

An extremely helpful tip for social media that I have learned while at Nature in Art is how to schedule posts in advance on social media. On Twitter you can schedule up to 30 posts in advance. This makes it much easier for businesses to keep up with all of their social media sharing, allowing them to pursue other avenues of advertising. I have done up until July in social media for Nature in Art, enabling me and the lead curator to focus on other things coming up: like the exhibition coming up on the 26th of March: The Langley Mill Pottery Exhibition!

In the most recent Nature in Art newsletter (sent out quarterly to all members and available to purchase in the shop) there is a three page background on Langley Mill Pottery that is very interesting and thorough if you would like to know more before going to the exhibition. There is one point in my research that I have elaborated more on that is not in the pamphlet that I found very interesting. It mentions three prominent artists working in the mill at the same time in the 1880’s. These people were Mary Helen Goodyer, George Leighton Parkinson, and a relative of the owner of the mill, Eleanor “Daisy” Calvert. Each of these artists were very accomplished and something should be said for their perspective styles. They also had very distinctive signatures in their work; something that people visiting this exhibition should look out for! It would be very exciting if visitors could pinpoint different works done by one of the three different artists and find their insignias.

Mary Helen Goodyer’s pieces have designs cut directly on the surface, executed through colored slip glaze, which had been previously applied to the surface of the piece. In some examples of her work, the design, usually botanical, has been built up with layers of other coloured slips, chrysanthemums being typical of this method of decoration. Gilding, or the
practice of adding gold to a work, was often effectively used to highlight the designs she created, dramatically demonstrated with her many sunflower motif jars. 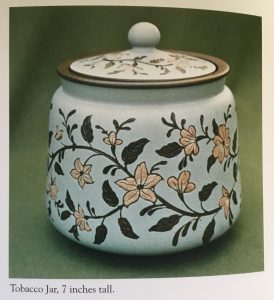 George Leighton Parkinson was originally a landscape artist, which is reflected onto many of his monogrammed pieces of Art Pottery. Biscuit barrels, vases, plaques and jardinieres all bear examples of his work, where a view of buildings of architectural, ecclesiastical, or historical interest have been incised, then painted on colored slips. Swallows were often included in these scenes. Seascapes were another regular theme on his decorated pieces. Some of his relatives lived in Scarborough, and he is known to have cycled there in the summer months, depicting seascape scenes from there. 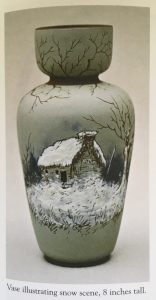 Daisy Calvert was the daughter of William Calvert, one of the initial owners of Langley Mill Pottery. She started decorating pottery as young as 16 at the Mill. Her insignia only appears between 1890 and 1894 when her father owned the business and she was old enough to participate. The pieces of Art Ware that Daisy Calvert decorated were usually of botanical subjects, especially poppies, daisies, ears of wheat and barley. She also created some more stylized flowers, which are not as easily identified now.