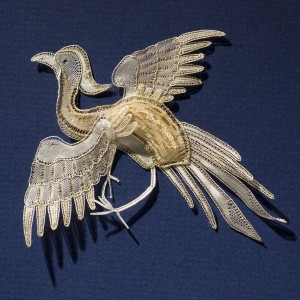 A display by Dutch lace maker Yvonne Scheele-Kerkhof  and her interpretations of Asian motifs.

She describes her work as ‘painting in thread’ and through these exquisite pieces she takes us on a journey to discover the beauty of the Orient and the meaning and symbolism of the designs.

The Beauty of the Orient is on show until April 24th.

This display complements another exhibition on show at the museum entitled A Mothers Love. Find out more here. 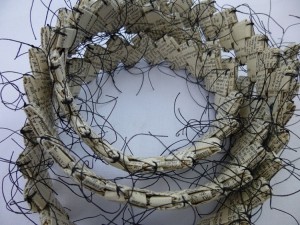 Inspired by nature in a single seedpod or insects sheltering in the tree canopy, a found treasure or beloved artefact, the work within this exhibition is constructed using material such as handmade paper, rusty wire and recycled lace, charting a creative textile journey to a place that is On the Edge of traditional stitch practice.

On the Edge is on show until April 10th. 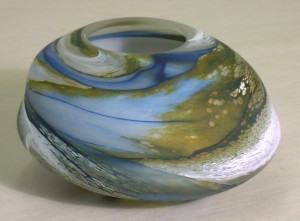 This display will highlight a collection of nature-inspired glass, mostly loaned by the Broadfield House Glass Museum, but will also include work from the Nature in Art collection.

A number of different techniques will be on show, demonstrating the wonderful variety of items and revealing how craftspeople have exploited the many qualities of glass to celebrate nature.

Melting Point will be on show until May 22nd. 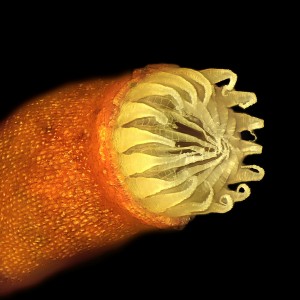 This is Nature in Art’s first ever exhibition of stereoscopic (3-D) images, first invented in 1832 and now enjoying a revival.

You will be able to borrow some of our 3D glasses and go on a journey through the micro world, seeing things, as for the first time, in their true three dimensional form.

Discover a whole new way to see and enjoy the beauty in nature.

Small but Perfectly Formed will be on show until June 12th.

Around 300 paintings, drawings, original prints, photographs and sculpture by professional and part-time members of this active organisation will be on display, the majority for sale.

Members of the Society will also be demonstrating throughout the exhibition.

The exhibition is FREE to attend *normal admission charges apply to view the museum galleries* and is on show until June 5th. 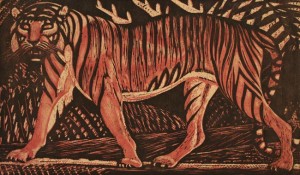 This display is a celebration of the work by James TA Osborne RE (1907 – 1979) who regularly exhibited at the Royal Academy and the Society of Painter-Etchers and Engravers.

He was well know for his experimentation with print and paper and leaves behind a varied body of work, examples of which are held in public and private collections internationally. 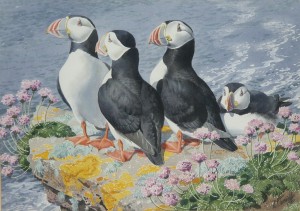 This exhibition has been assembled in collaboration with the Charles Tunnicliffe Society.  We record our thanks to them, particularly Ken Broughton and Stuart Pittman, and to the many private collectors and public collections who have loaned work.  Tunnicliffe was one of the most important and influential nature inspired artists of the twentieth century. His impact is still felt today.

Charles Tunnicliffe (1901 – 1979) was the only son of a shoemaker turned farmer and grew up in Cheshire.  All his later work as an artist shows him to be a man totally familiar with the animals and machinery of the farm, and the beauty, customs and modesty of the countryside. After art training in Macclesfield and Manchester, he won a scholarship to the Royal College of Art, London, where he won another scholarship for a further year to study etching.

Having worked for a while as a part-time teacher, Tunnicliffe left London in 1928 and returned to Cheshire as a commercial artist. In 1932 he produced the illustrations for Henry Williamson’s Tarka the Otter which was a great success and established the reputations of both artist and author.

From 1947 until his death Tunnicliffe lived on the Isle of Anglesey.  He was hard work and versatility personified. Etchings, wood engravings, scraper-board illustrations, oil paintings, delicate pencil drawings, simple tiny composition sketches and large finished watercolours – all were part of his prolific output.

He was elected RA in 1954 and awarded the OBE in 1978. In 1974, he was honoured at the Royal Academy by an exhibition of his collection of measured drawings of birds. Several of these (and other RA pictures) are included in this show.

Having had work widely published in magazines and books, including some of his own, as well as the likes of Cussons Imperial Leather advertisements, Brook Bond tea cards, The Radio Times, Ladybird books and for 12 years the covers to RSPB’s magazine Bird Notes, he is an artist whose work has impacted on countless people’s lives, earning respect too, not just in the wildlife art world, but the wider art establishment.

Sir Peter Scott described him as simply ’the greatest wildlife artist of the twentieth century’. 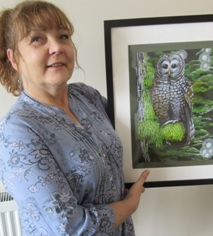 Exhibition:
The Independence Trust strengthen people’s emotional and physical well-being to support them to fulfil their potential. This display features artwork by some of their clients who have found art a real help and inspiration in life.

JOIN US FOR A SPECIAL EVENT ON THURSDAY 25th AUGUST:
Elephant in the Room Cheese & Wine Evening Invite. 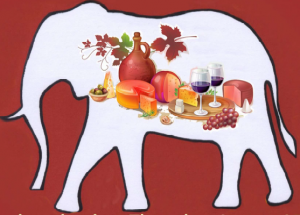 ition whilst enjoying cheese and wine. 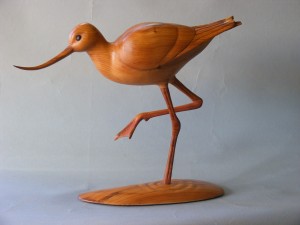 Exhibition (on show in the Atrium of our Education Centre)
A diverse show of paintings, prints and sculpture which demonstrate the inspiration that this established local group has drawn from the natural world. Founded in 1965, this is their second exhibition at Nature in Art. Part of our programme of shows supporting and highlighting regional groups and talent.