These sequences allow you to view the object from all sides. Simply give the file a moment to load and then use your mouse or touch screen to turn the object around. You can stop the turn at any point.

Because we regularly change our displays so that we can share as much of our collection as possible, there is a possibility that all these items may not be on show when you visit. To be certain of seeing a particular item, please contact us first so that we can make arrangements for you. 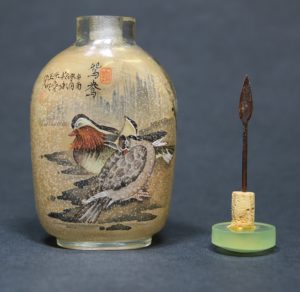 CHINESE Painted Bottle (early twentieth century).  Nature in Art has several other nineteenth and twentieth century Chinese bottles in its permanent collection in glass, stone and carved laquer. This painted bottle is little more than 2 inches in height and has been painted on the inside.

Such inside-painted bottles first came about in the 1800s and were popular until around 1920 or 1930. The first bottles were actually made to be used for snuff (this one has a spoon attached to the inside of the jade lid although it was probably never used for snuff), but later they were made to be appreciated for what they were and were enthusiastically collected. Special tools and transparent bottles were developed so that calligraphy, natural scenes and landscapes, flowers or wildlife could be painted in miniature and in reverse on the inside walls of the bottle. The inside had to be frosted by sandblasting before paint was applied to them in order to provide a stable surface. The applied colours were usually Chinese pigment, watercolours or oil paint. In more modern times acrylic paint has also been used by many contemporary Chinese inside painters, dedicated exclusively to produce such works.

GEOFFREY DASHWOOD (British contemporary) Carrion Crow (bronze).  Geoffrey Dashwood was born in Hampshire in 1947. At the age of fifteen he won a scholarship to study at Southampton College of Art, but left after a brief period, preferring to study directly from nature. In the 1980′s he discovered a gift and a passion for sculpture. His earliest works were small, highly detailed studies in the mainstream of traditional English wildlife art and comparable in style to the famous 19th century French Animalier School of Sculpture. These early works brought him commercial success, yet he became increasingly dissatisfied with the constraints of realism and the lack of personal expression the genre afforded him.

Dashwood started to experiment with larger life-size and monumental works and began to eliminate all superfluous details, creating boldly modelled pieces. He refined his sculptures to attain tactile, pure forms, further enhanced in bronze by the application of coloured and multi-coloured patinas. In these sculptures he combined his own aesthetic ideals, establishing a distinctive style which is now internationally recognised as being quintessentially Dashwood –  ‘What  I seek is a coherent hybrid of bird and art …… I respect my subjects purely and simply for what they are and attempt to realize their spirit in sculpture, devoid of human attributes …. Empathy is conveyed with minimal simplicity and the work allowed to speak emphatically for the bird that inspired it.’

Nature in Art has held two exhibitions of his work, the first in 1989. In the foreword to the 2014 exhibition catalogue, naturalist, writer and broadcaster Chris Packham says, ‘Dashwood’s technique developed through naturalism to the almost abstract. It is reductive. All but a few surface details are cast off to leave a simplicity, which purifies and emphatically strengthens each work. With flagrant aplomb and authority he represents the functional aesthetics of nature’s machines in an economical style, which, with a sympathetic amalgam of subcutaneous form, aerodynamism and studied physiology, produces all the tension, the sensuality, the absolute charm of living birds’.

Whether it is a small bird or a monumental public sculpture, Dashwood’s style is immediately recognisable as his. Nature in Art has one other sculpture by Geoffrey Dashwood in its permanent collection, a cormorant (also life-size). 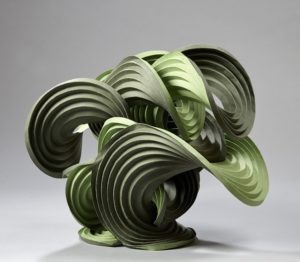 ERIC and MARTIN DEMAINE (American contemporaries)  Natural Habitat, folded paper.  Eric Demaine was born in Nova Scotia in 1981. From the age of 7, he was identified as a child prodigy and spent time traveling across North America with his father, Martin, an artist sculptor. Home schooled until entering university at the age of 12, Eric completed his degree at 14 years of age and completed his PhD by the time he was 20 years old. His dissertation focused on the field of computational origami. In 2001 he joined the faculty of the Massachusetts Institute of Technology (MIT) at age 20, reportedly the youngest professor in the history of MIT, and was promoted to full professorship in 2011.

Erik and Martin Demaine are renowned for their mathematical origami artwork and are fascinated in exploring the connections between mathematics and art. Pieces by them were part of the Design and the Elastic Mind exhibition at the Museum of Modern Art (MoMA), New York in 2008, and are now held in the MoMA permanent collection. That same year, Eric was one of the featured artists in Between the Folds, an international documentary film about origami practitioners. In 2015 Nature in Art, in association with the British Origami society, created an exhibition of nature-inspired origami, including this work.

This piece was made by glueing two differently hand coloured pieces of paper together prior to folding. Called a crease folding technique, the paper has been scored and creased before folding. When folded along curved creases, paper shapes itself into a natural equilibrium form. These equilibria are poorly understood, especially for curved creases. The Demaine’s  are exploring what shapes are possible in this genre of self-folding origami and say that ‘this transformation of flat paper into swirling surfaces creates sculpture that feels alive’. Though not shown in the turn an object feature, when displayed at Nature in Art Eric and Martin place small vinyl frogs on the sculpture.

Florence Barlow was employed at the Doulton Lambeth Art Studio from 1873, producing her renowned bird and floral studies for 36 years until 1909.  Her sister Hannah, who had joined in 1871, concentrated on horses and other animals. Signatures on the foot of this piece show that the other decoration was by Emily Storer and Mary Aitken.

The Doulton pottery was founded by John Doulton (1793-1873) and John Watts who were trading as Doulton & Watts from Lambeth High Street by 1826.  There were many potteries in the area at that time taking advantage of the river side location to bring in materials and take out the finished goods. In 1853 John Watts retired and the two companies merged to form Doulton & Company. In 1863 Henry Doulton joined the management committee of the renowned Lambeth School of Art. Doulton worked closely with the School and several well-known artists worked for the firm, including George Tinworth, the Barlow sisters, Arthur B Barlow, Mark Marshall, Frank A Butler, John Broad and W Rowe. The Doulton’s gave them great freedom to express their talents.

The decorative items that were produced became recognised and Queen Victoria ordered some for Windsor Castle. She visited several exhibitions of the Lambeth pottery and the Prince of Wales also visited the pottery on several occasions. The company was granted the Royal Warrant in 1901, which gave it the right to use the word ‘Royal’ in its title, hence the Royal Doulton we know today. 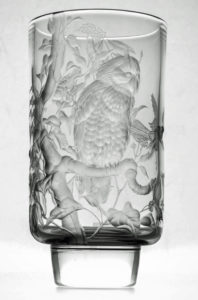 MICHAEL FAIRBAIRN (British contemporary) Long-eared Owl vase Copper wheel engraved glass. The main feature of the copper wheel method of engraving is that the glass is moved over the tool rather than the tool over the glass. Using this challenging technique enables Michael to exploit the refractive and reflective qualities of crystal to produce engravings displaying amazing detail and form. Look closely at the edge of this vase as you turn it around to see how, in places, significant amounts of glass have been cut away. Like this item, it is not unusual for Michael to take hundreds of hours to complete a piece. A major retrospective of his work was held at Nature in Art in 2015 to celebrate 70 years of his glass engraving.

Artist, craftsman and designer, Michael Fairbairn was born in 1935. At the age of 13 won a scholarship to attend the Stourbridge Secondary School of Art. At the age of 15 he produced a piece of work for his Intermediate Certificate which enabled him to be accepted at Stourbridge College of Art where he undertook a National Diploma in Design at the end of which he progressed to The Royal College of Art.  Then, after completing two years National Service in Hong Kong, he returned to the Royal College of Art with a scholarship where he studied for a further three years. Michael graduated in 1961 with a Silver medal for work of special distinction in glass engraving and was immediately commissioned to make a piece to fit into the crook belonging to Bishop Bardsley of Coventry. The crook is still used to this day. Michael’s experience and training enabled him to accomplish many engraving styles but his speciality has always been wildlife themes and settings. Such was his enthusiasm for this subject that in the 1970’s he undertook the daunting task of producing a series of engraved items of threatened and endangered species – 150 pieces that took over 4 years to complete. A proportion of the proceeds were given to World Wildlife Fund. His detailed, painstaking approach and mastery of the technique is refreshingly set apart from the modern mania for computer-aided design and mass-produced work and stands out as a testament to the enduring significance of meticulous craft-based skill.

Nature in Art has four other items by Michael Fairbairn in its collection. 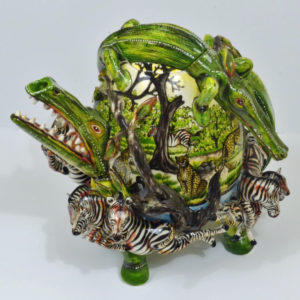 OWEN MASEKO (Zimbabwean contemporary) Crocodile Tea Pot. Owen Maseko was born in Insiza in Matabeleland, Zimbabwe. He trained at Mzilikazi Art and Craft Centre from 1994 to 1996. As well as ceramics he produces watercolours, acrylics and oils on canvas. Owen is greatly inspired by people’s day to day activities and individual life experiences, including political issues. Despite the difficult times in Zimbabwe, Owen says ‘If I am to paint the world, I would present it laughing’.

Owen has produced ceramic sculptures for an international market including Zimbabwe, South Africa, Namibia, USA, and the UK. He has exhibited in several national arts institutions around the world and has attended and taught at several national and international workshops. His large ceramic tea pots and sculptures show the natural beauty and experiences of life in southern Africa. Owen is inspired by animals, flora and fauna and bushmen and women. Apart from its unique style, there are great technical challenges in making a teapot such as this.

We also have a selection of videos showing 3D artists and makers at work. Click here.