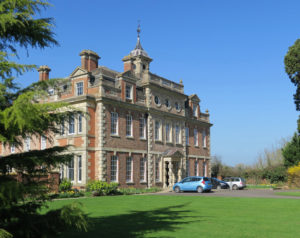 Wallsworth Hall has a curiously obscure history. It was built on the site of a timbered house from the Tudor period soon after 1740 by Samuel Hayward, a local businessman, landowner and magistrate, as a wedding present for his wife, Catherine. They were a prominent local couple and a memorial stone dedicated to them and their children can be found in the south aisle of Gloucester Cathedral. 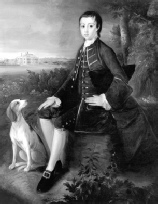 The Hall has had many changes made to it over the years. The painting of it set in the over mantle in Gallery One is a copy of an engraving made in 1771 for Samuel Rudder's famous book, 'Great Houses of Gloucestershire' and depicts the Hall as it was in Samuel Hayward's day.

The oldest part of the building faces up towards the side gardens and is built of locally made bricks laid as ‘headers’ with their ends showing on the outside with quoins made of sandstone. The main front was added a little later and has several architectural features typical of the period.

Inside, many of the original features still survive including the magnificent staircase, which is thought to have been installed in 1753. A fine example of its period, the carved twisted 'barley sugar' balusters, newels, hand rails and moulded underside are all made in mahogany. It is said that the wood came from Samuel Hayward's own plantations in Jamaica, one of the sources of his great wealth.

A beautiful example of Georgian architecture, the house was later bequeathed to Samuel Hayward's son-in-law, a de Winton, as his own son sadly died when only seven years old. The de Winton family lived at Wallsworth Hall from 1803 - 1903 and at around 1865 a top floor, new roof, two extensions and the off-centre clock tower were added, which updated the aesthetic of the building dramatically.

The de Winton coat of arms, carved in stone, was set in the outside wall of one of the extensions, now the south end of Gallery One. A wooden coat of arms also remains above the door at the bottom of the main staircase in which their motto, ‘Look unto Thyself’ is inscribed in ancient Welsh. At around the same time, the fine ‘Carton Pierre’ (papier maché) ceiling, with its unusual combination of images was installed in the entrance hall, probably by French craftsmen known to be in the county at the time. The images were most likely to have been hand-picked by members of the family from a pattern book and put together to create their own unique design.

As with the staircase, mahogany panelling was a feature of the building. The entrance hall was originally fitted with unpolished mahogany and the fireplace, now painted, is made of the same wood. The unusual pine fire surround and over-mantel in Gallery One is an original feature, which has had many layers of paint removed. Little is known about this impressive piece but it is thought to have been made by a Gloucestershire maker called Swan, who was influenced by Italian and Flemish styles. The carved bulrushes and ‘running water’ design are particularly appropriate for Nature in Art.

In 1903 the whole estate covering 655 acres and including land, houses and farms in Twigworth and Sandhurst was split up and offered for sale. Wallsworth Hall, after failing to find a purchaser at auction, was bought by Mr. James Dorrington, an industrialist from the Midlands, together with its extensive stabling, three lawn tennis courts, a fives court, two kitchen gardens, a conservatory, vinery and apiary, a brew house and baking oven. Sadly, none of these features remained at the time Nature in Art Trust bought the building.

James Dorrington also made extensive improvements including the installation of a diesel generator to provide electric lighting and updating of the drainage systems and water supply. Mr. Dorrington died in 1920 and his wife lived a further 23 years on her own in Wallsworth Hall with a large staff. After her death in 1943 all properties were put on the market but many of the household items, fixtures, machinery and fine pieces of furniture, paintings and other collectables totalling 1500 lots had already been sold at auction over a five-day period in 1945.

The Hall itself was purchased by the Gloucester City Corporation in 1944 at the instigation of the government, who used it as a residential nursery to care for infants whose mothers were working as part of the war effort. With a fully qualified staff, it was also used as a centre for training nursery nurses and remained o until 1953 when the number of children needing care had significantly fallen and the house was sold.

The house then fell into private hands and rather than reverting to a fine family home, spent much of its time empty, part of the time as a furniture store for a local auction house (a partner of which was the late Arthur Negus) and part of the time as maisonettes until May 1987 when the Nature in Art Trust bought Wallsworth Hall as a listed Grade 2* building. Much of the fabric of the building had suffered greatly and renovations took 12 months to complete.

Serious outbreaks of dry rot and other ailments had to be tackled carefully whilst retaining the original features and without disturbing in the roof, one of the largest bat roosts in the county. After removing repairing and reinstating many walls, joists, floors and ceilings the building was finally made suitable for the display and storage of art. Heating, humidity control, UV filtration and lighting equipment was installed and facilities for visitors with disabilities were incorporated and the whole Hall redecorated. When the work was complete, a series of exhibition spaces of character and quality had been created. The Nature in Art Museum & Art Gallery was officially opened by HRH Princess Alexandra in June 1988 and a new era in the history of Wallsworth Hall began.

Since then the Hall has continued to be sympathetically developed to include a new conservatory extension of the Hayward Coffee Shop overlooking the gardens, made of environmentally friendly materials, an art studio and the Wallsworth Centre, a dedicated space to accommodate the highly regarded schools education programme and further exhibition space, all of which have been positioned on the sites of previous constructions that have long since been demolished.