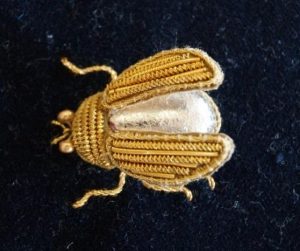 Rarely seen, yet glittering to behold, this is a display of gold, silver and metal thread embroidery to dazzle and delight, embracing nature in all its forms. All the pieces are made by members of the Goldwork Guild, at least one of whom will be demonstrating this ancient craft daily within the exhibition. The Goldwork Guild was formed in 2004 by Janice Williams to keep the art alive in the 21st century.
Modern goldwork will be displayed together with a few antique pieces reflecting the fact that this work dates back over 2000 years when only royals, nobility and those of great wealth could afford such magnificence in garments, robes, domestic furnishings and religious embellishments. Whilst the history of metal thread embroidery goes back so far in history that its origins are lost, it’s widely believed that goldwork embroidery originated in China. From there the art form spread to Asia, Persia, India, Japan, the Middle East, and the ancient civilisations of Assyria and Babylonia. Over time and up to the present day it further spread to North Africa, Spain, Italy, Western Europe, Great Britain, Scandinavia, North America, Australia, Canada and New Zealand. Goldwork is also mentioned in the Bible within the book of Exodus, where it states ‘He made the ephod of gold, blue, purple, scarlet and fine twined linen. They did beat the gold into thin plates, and cut it into wires, to work it in the blue, and in the purple and scarlet, and in the fine linen with cunning work.’ The very earliest examples employed pure gold and silver. The metals were flattened and wound around strands of animal and human hair. However, the gold and silver were both very brittle. Later the metals were wound around silk, paper, animal gut and parchment, and originally this process was done by hand which required great patience and skill, and the cost of such threads was extremely high.
Present day goldwork and metal thread embroidery is more affordable now as there are now substitutes, even though real gold and silver is of course still used (and comes from Japan.)
Throughout history, goldwork has been worked into fabric decoration and can be used not only in other embroidery, but applique with variegated shimmering patterns made luxurious using gold, silver, metallic threads and precious stones.
Ceremonial, military and religious attire is still adorned with the richness of gold embroidery. However, the design for military pieces is necessarily constrained by tradition as one would expect, but the goldwork that embellishes domestic, religious and ceremonial attire is still being worked today by many embroiderers. Other techniques and materials can be worked to create contemporary pieces reflecting the 21st century.
This particular art form is prized for the way the light plays upon it, which is influenced not just by the richness of the metal thread used, but also by the variety of metal threads available and the techniques used.