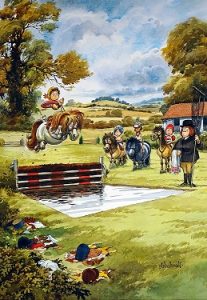 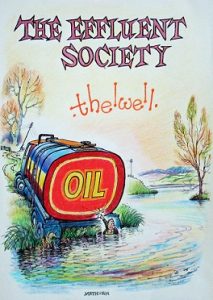 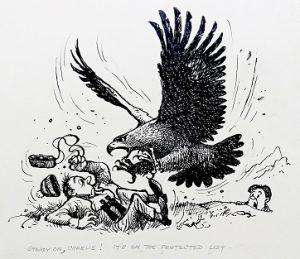 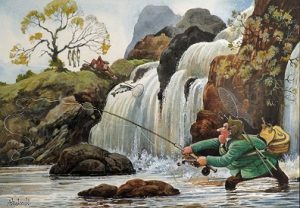 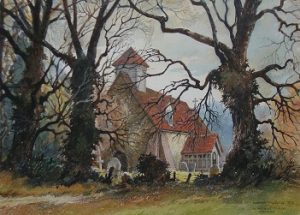 An exhibition of original cartoons and paintings by the renowned Norman Thelwell (1923 – 2004).

Norman Thelwell is one of the most popular cartoonists to have worked in Britain since the Second World War.  Although best known for his images of girls and their fat ponies, his work is far more wide ranging than many realise. The countryside and environment were passions that informed his work throughout his life and his cartoons  were a powerful way for him to comment on issues of the day.

This exhibition of original artwork has generously been lent by the family archive and, although it includes a few of his renowned horse and pony pictures, it also embraces serious paintings completed purely for pleasure, and drawn and painted cartoons with relevance to nature, the countryside and environment and the human impact upon them. Together they reveal not just his skill as an artist, but also his mastery of sharp social comment and his awareness of then current and future threats. He used satire to convey serious messages about the need to preserve the natural world; many of these still have poignancy today.

Many of his 34 books centre upon country life and country pursuits, and their light-hearted images are founded upon a thorough knowledge of their topics. (He was a keen angler, for example.) Many of the original works on show in this exhibition featured in these  books including The Effluent Society (1971).

Born in Birkenhead, Cheshire on 3 May 1923, Thelwell showed a  talent for drawing very early in life and found drawing and painting much easier than other subjects – ‘with drawing, the answer was always there in front of you – you only had to look’, he said.

During the Second World War he served with the second battalion of the East Yorkshire Regiment, and was soon transferred to the intelligence section because of his ability to draw. Later he was posted to India with the Royal Electrical and Mechanical Engineers, subsequently becoming Art Editor and sole artist for a new army magazine. He even designed new uniforms for the Indian army.

After the war, Thelwell studied at Liverpool City School of Art  (1947-50) and lectured on design and illustration at Wolverhampton College of Art (1950-56). He sold his first drawing to Punch in 1950, beginning a 25-year relationship that resulted in more than 1,500  cartoons, of which 60 were used as front covers. He also worked as a cartoonist for the News Chronicle, the Sunday Dispatch and the Sunday Express and began to produce his own comic books.

For the last quarter of a century of his life he lived in the Test Valley at Timsbury, near Romsey, gradually restoring a farm  house and landscaping the grounds.